Lots of things are happening everyday ☆
So there’s lots I want to report on, but…
It makes me sad that I can’t seem to keep up (T T)

All of us performed
“Momoiro Punch”, “Seishunfu” and “Chai Maxx ZERO” together (*^^*)

And then and then,
I did a collab with Akko-san ☆ on “Furui nikki”
I’ve never felt so nervous in my entire life…

But Akko-san was totally different from how I expected her to be like (maybe I’m exaggerating? ^^;)

Oh! Of course, I was still really nervous throughout the whole show ^^;

Because we work on our singing everyday

To be able to perform a duet with Akko-san
just seems like such an impossible thing,
and it felt like I had flown over the clouds and reached a faraway life’s dream 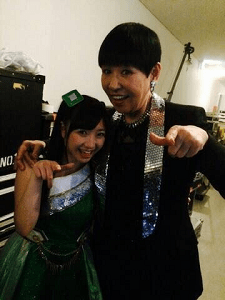 Oh! But here’s a photo of us together,
which means it all really happened~ .:*:゜☆

Thank you ♡
To everyone and everything that helped to give me this chance
And to everyone who cheered me on
I’m so so grateful! (*’-’*)

Then, we also attended “Honma dekka”

Oh! ☆ I always watch it on TV—
But being there personally to watch all the performers throw puns at each other
during the filming for “Honma dekka”
was truly the most interesting thing (* *) 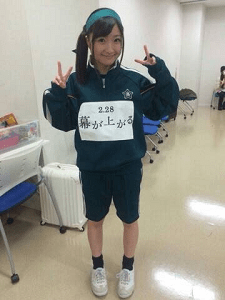 Tomorrow is “A-Stadio” on MSta!!
Then on Thursday, “Shimura Doubutsuen” with Black Mayo and Yukai na Nakamatachi
On March 1, “Daredatte haran bakusho”
Then there’s “Sky Perfect Free Day”, and a second broadcast of “Sky Perfect Music Festival”
Then~, “Tetsuko no heya” on March 3…..
Wow wow, it never stops ^^;

Oh! By the way, we performed live on “PON” today,
and also on Shimuzu Michiko-san and Ootani Nobuhiko-san’s radio show! ♪

And there’s another live performance on “Mezamashi” tomorrow ☆

There’s just so much to be thankful for that I can never hope to finish writing,
but this is really the most number of performances Momoclo will be putting up ever

And in the end,
I hope it’ll give us the chance to promote the movie to everyone,
as well as a chance to let everyone see the best of Momoclo too~ （*・Θ・*） 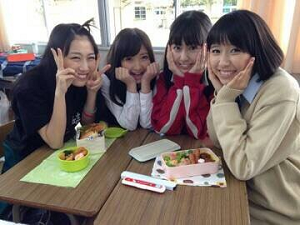 And then and then, the national pilgrimage continues ☆

Today, all 5 of us gathered for a meet-and-greet session
at “Maku ga Agaru”‘s sacred ground, Fujinomiya
(Thanks to everyone who came down! (*^^*))
And we’ll be going to other places soon too——— ♪

P.S.
The BD and DVD for Toujinsai was released yesterday
Thanks to everyone who bought it so speedily— ♪