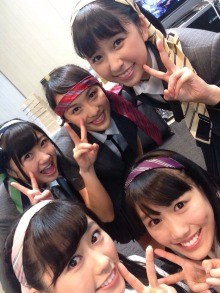 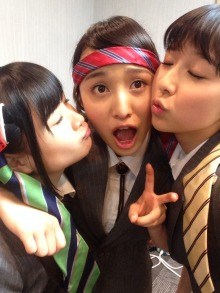 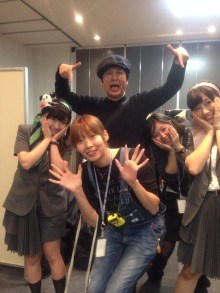 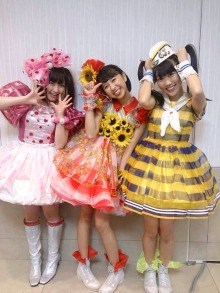 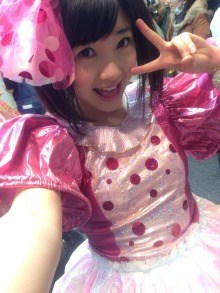 Wow, it feels like we’ve just rushed through this entire year!!…
And something impossible will be coming next year…
But I’d like to welcome the new year with calm spirits ^^;

Even when the new year comes,
we’ll surely have enough time (*・Θ-*)

Ah! But to everyone who has to work over the new year
Hang on!!
Fight-

Alright, as for me
Ever since that day when Momoclo received a new challenge
I feel like I’ve grown up a little bit ♪
(Oh, not as a dango ^^; lol)

I mean,
we’ve been performing with so many distinguished guests
these few days (* *) It’s just too much!!

So many eminent artistes right before our eyes
at Fuji TV’s Christmas Party,
and at the live broadcast…
It’s been a long while, but I felt that my heart was going to burst （>Θ<）

I mean,
I got to sing a duet
with Ise Shouzou-san himself, who wrote the lyrics and composed
“Nagori yuki” and “22-sai no wakare”
Full of tears of gratitude (*T T*) Can’t stop my trembling

Lots of other distinguished guests performed right before our eyes,
singing live,
and we got to sing along as well ♪
It was such a joyful time de-ariyasu
(Oh, Nishikawa-san also made us laugh until our tummies hurt ^w^)

To everyone who performed with us
Thank you so much

was another gathering of eminent artistes (* *)
(Thank you to everyone who watched ♪ and commented! *^^*)

Anything that’s written in the schedule book will come true .:*:゜☆

P.S.
We put on our favourite costumes
For the ending of M-Sta~

Notes:
1. Rikopii is the character Momoka plays in Christmas drama Tenshi to Jump. She believes that anything that’s written in her schedule book will come true.
2. The “supported” team is the opposite of what the Momoka-Reni duet unit calls themselves: Team “More support from the office” (Jimusho ni motto osare tai)