★Chapter 3 of the 5 month release project is revealed!
Classic album “A CLASSICAL” will be released on 8 Jan (Tue)!!

A classical album produced by Mr Yamashita Kousuke!
The 7 most popular songs chosen by fans in a fanclub poll, plus 2012 new songs “You&Me”, “Song 4 u” and “Missing”, arranged in classical style and performed by a full orchestra!
Famed composer Mr Yamashita Kousuke leads a group of young arrangers to fully rearrange all tracks! These various “all-time best” tracks have been delicately rearranged to retain the goodness of the original track and add on more layers! Furthermore, all recordings were done live so one can feel every sound, something which is precious to hear in this era.
Featured on the jacket cover, is an illustration done by Mr Uki, an upcoming illustrator who has been featured on Mr Murakami Takashi’s Kaikaikiki and Japan’s largest SNS “pixiv”‘s galleries, and has taken part in Google+’s illustration project! First-press copies come with a gift of the jacket illustration in poster form!
A combination of mainstream pop music and art, this is the birth of a timeless and beloved release!! 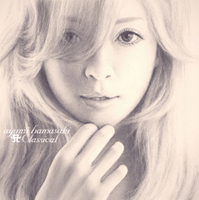